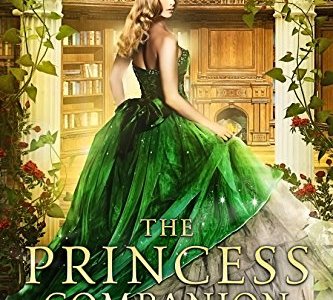 This is a Young Adult (kinda) series that is centered around fairytale retellings. Each story is a different relationship and a new fairytale. The realm has four countries and we rotate through with each kingdom’s royal family and unique political problems. The stories focus around mystery and adventure with a touch of political intrigue. While they can be predictable, the stories were really fun and the romances were genuinely very sweet.

Genre: Light fantasy – There are a lot of magical references but none of our characters use magic. Young Adult – The romances are all fluff. The main characters tend to be late teens (at youngest 16) to early twenties, so it’s your call.

My review: The retelling elements are really clever and the references make me smile. The romances are based in trust and love. They also always involve members of the other’s family or their friends. Well the relationships tend to cross classes, there is consideration for class politics and identities before and during the romance. Because it is a series you can the political ramifications as well.

I thought The Princess Pact which was a Rumpelstiltskin retelling that actually made sense! Melanie Cellier flipped the deal Rumpelstiltskin made and it was so smart and made me really care about the families created.

Ava and Hans from The Princess Fugitive. Honestly, princess and the guard is one of my favorite tropes, but I also love couples that make each other better.

Lanover. This is a kingdom that the Princess Game and the Princess Search take place in. There is a huge variety of geographic location and culture that actually gets explored.

Arcadia (from The Princess Companion). I think we do spend the most time with this family but they are so genuinely welcoming and love spending time together. Lily and Sophia, twin princesses, are hilarious. The parents genuinely just care about Prince Max’s happiness.

The Princess Search. One I never expected an Ugly Duckling retelling to work so well or hit so hard. It was a great travel and mystery story. There is a lot of unpacking of past trauma and focus on valuing relationships and oneself. The romance was beautiful and such a slow burn.

So I read a lot this year, like a bunch, most of which due to the early pandemic. I read 140 books this year (woohoo!). For the most part I read a lot of wonderful books that were delightfully written. However, few had the extra spark of a favorite with any emotional or potent connection.

10. The War That Saved My Life by Kimberly Brubaker Bradley: This a middle grade historical fiction novel that wrecked me. Two children escape their abusive mother in the London evacuations of WWII. They find themselves staying with a woman who has closed herself completely off. It is a really hard, but beautiful story about recovery and family.

9. A River of Royal Blood by Amanda Joy : This is the most slept on fantasy. The magic system is intricate. The politics are ruthless. There are two princesses pitted against each other and a protagonist that is scared to survive. Please read it!

8. The Deep by Rivers Solomon: This is a book about mermaids and generational trauma. I don’t know how to describe it better. It is a must read with an incredibly unique and powerful story.

7. Red, White, and Royal Blue by Casey McQuiston: I resisted for a while the hype of this romance. If for some reason you have missed it, this is the story of the first son of the United States and the Prince of England. I believed in Henry and Alex. I believed in their families. It is a one-sitting, heart-warming, edge-of-your-seat read.

6. Homegoing by Yaa Gyasi: This is possibly the most high concept book that follows two families down generations. We open with half-sisters Effia and Esi in Ghana. Effia is married off to an English colonizer who owns one of the slave ports and Esi is imprisoned and sold into the Atlantic slave trade. Each generation was so beautifully written and despite following almost 20 different characters each voice was unique and impactful.

5. The Stone Sky by N.K. Jemisin : Really the whole Broken Earth trilogy is stunning and grim. It is a a masterful work of storytelling and world building. It was a really satisfying conclusion. The world also expanded in a way that was astonishing but not blindsiding which I feel is a hard line to walk. Highly recommend, if you like fantasy even a little.

4. I’ll Give You the Sun by Jandy Nelson: I cried at a work event reading this book. We follow twins which I love, in a dual timeline which I LOVE. There is so much about grief, love, and art. It is just took me in fully into the emotional rollercoaster of Noah and Jude (the twins).

3. Whichwood by Tahereh Mafi : This is written like a fairy tale. Whichwood is so darkly and whimsically atmospheric. Laylee is fated to wash the dead as the mordeshoor after her father abandoned her following her mother’s death. There is suffering, friendship, prejudice, failing, and ghosts. I think about this roughly once a week.

2. The Once and Future Witches by Alix E. Harrow: Suffragettes and witches. That’s the whole pitch. I just want to talk about this book and these sisters. We follow three sisters that have been exiled from their family home and find themselves trying to make their own way alone when they find each other again. In addition, the chemistry between the two main couples could set a person on fire.

I have done my yearly goals on this blog for the past several years. While for the most part I have stuck to them I think announcing goals into the void can help hold myself accountable. After this past calendar year it feels impossible to prepare for the world that is coming, like it will continue to zig and zag in every direction (murder hornets anyone?). I feel like it is impossible to plan anything, but these goals are mostly small and habit oriented.

Let me know if you have any goals for the upcoming year. Happy 2021!

I am a twenty-something old graduate and young professional.

I am still figuring out how to become a “real adult”.

Most of this is is going to be working things out, talking about things I love, or just my cat.